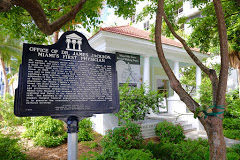 The offices and Visitor Center & Gallery are housed at the former office of Dr. James M. Jackson – Miami’s first physician. The structure was built in 1905 and originally stood on Flagler Avenue in downtown Miami. In 1917 it was lifted and relocated by barge across Biscayne Bay to the Brickell area. In 1978 it became the headquarters of Dade Heritage Trust to serve as a center where residents could learn about historic preservation as well as a public gathering place.